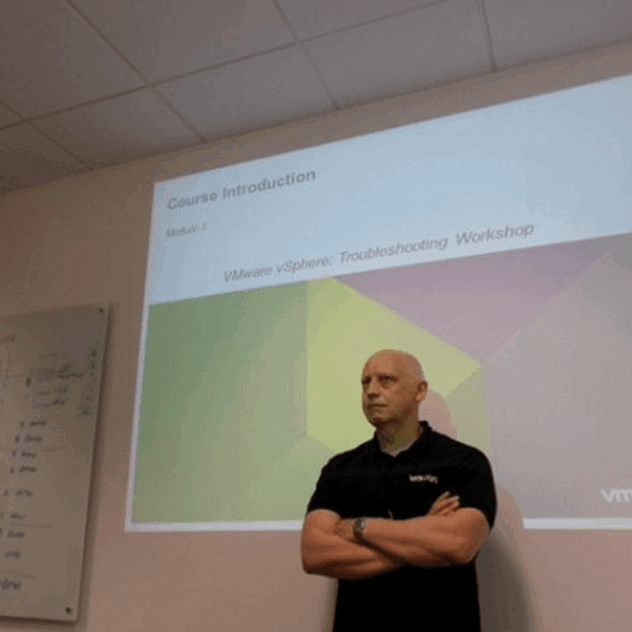 VMware, CompTIA & CCC: Principal Learning Technical Specialist
Bryan has been working at QA as one of the principal virtualisation trainers for 13 years and counting, specialising in VMware, but also working with Microsoft Hyper-V, and multiple Cloud technologies.

Bryan O’Connor is a Principal Learning Specialist and looks after QA's VMware, CompTIA and Cloud Credential Council (CCC) curriculums. He delivers a wide range of courses and holds over 50 CompTIA, Microsoft, VMware and other technical certifications himself.

Bryan has worked in the IT industry since 1986 when he was a hardware engineer on Commodore Pets, then moved into networking, and later specialised in virtualisation and cloud technologies. In 1997 he started working for QA training as a Microsoft and VMware trainer.

Bryan has taught VMware Products since 1997, became a VMware vExpert in 2012 and has worked with VMware in developing their range of vSphere courses. He speaks at various technical events and owns and runs his own VMware blog at www.bryanoconnor21.co.uk.

Starting with DOS, Bryan has worked with Microsoft technologies since 1986 and taught it since 1999. He runs his own YouTube channel at www.youtube.com/bryanqa, which hosts hundreds of Microsoft demo videos.

Outside of QA, Bryan enjoys spending time with his wife Tracey and their two daughters Meagan and Jessica, unless there’s a Grand Prix on the TV, when he enjoys paying Tracey, Meagan and Jessica to disappear for the day.

In another of Bryan O'Connor's technical VMware blogs, he details the do's and don'ts of adding user accounts in vSphere.

How to limit the number of VMware VM snapshots

In this technical blog, vExpert Bryan O'Connor explains why, and how, to limit the number of VMware snapshots for a virtual m…

Bryan O'Connor explains what a virtual machine is and what the benefits of virtualisation are for any organisation.

What is a hypervisor? What is vSphere vMotion? What is HA? Bryan O'Connor, our vExpert, decodes commonly used virtualisation…

What is the benefit of getting VMware certification?

All about the VMware Data Center Virtualization Certification 2021 update

Which VMware certifications and tracks are right for me?

Why multi-cloud, what are the challenges and how can VMware help?

What is the difference between hybrid-cloud and multi-cloud? Why use multi-cloud for my organisation and what are the challen…