National Highways contacted QA to design online learning content for their internal Equality, Diversity and Inclusion training. While it was vital that employees understood the legal elements of the policy, National Highways wanted people to really engage and connect with the content.
9 likes
by QA
10 January 2022

National Highways introduced its first dedicated Equality, Diversity and Inclusion (EDI) role in January 2020, and this was quickly followed by the launch of the organisation’s revised Public Sector Equality Duty (PSED). With a new EDI team in place, National Highways had already signalled the importance of equality, diversity and inclusion to its internal culture.

The starting point for the National Highways team was to create an online learning module that was not only informative but was forward-thinking in terms of the content design and user engagement. While it’s vital that employees understand the legal elements of the policy, National Highways wanted people to really engage and connect with the content, and therefore the policy. Only if this was achieved, would it change the way that people think and behave long-term by providing them with a safe space to explore the sensitive issues raised. This was a key objective of the project.

“The start for us was to have a new EDI module that had more of an emotive side to it. A thinking piece that would get people thinking about this topic. We wanted our people to think more inclusively.”
– Ronnie Calderwood-Duncan, EDI Manager, Highways England

The initial plan was to start the work in September 2020, but a conversation with the CEO in May 2020 quickly led to a much shorter timeline. The new timeline required the learning module to be delivered in September 2020!

The deadline was driven by the launch date for a high-profile, three-month internal comms campaign, Respect at Work. This was scheduled to go live in September but the module would be formally launched during National Inclusion Week at the start of October, so it was a deadline that couldn’t slip. Ronnie says,

“Respect completely underpins our approach to creating an inclusive culture. The e-learning module would be the route and measurement for employee engagement in the campaign, so it was critical it was delivered on time.”

We created emotive stories based on the real-life experiences of National Highways colleagues. These stories addressed sensitive topics and provoked thought, leaving the employee with a lasting impression. The use of these stories helped the learning module meet the objective of creating a safe place to really think about highly sensitive subjects, and specifically to spend time addressing the question, “How would I feel?”.

After every story, there was a reflection. It was this interactive element of the training that actively encouraged the employee to think differently. 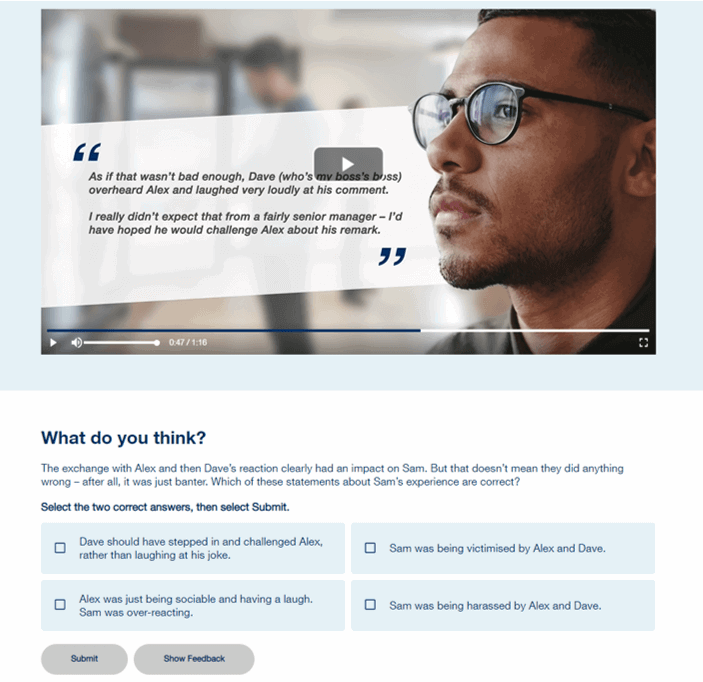 “For us it was about engaging with the learners in an important area that everybody thinks they understand. We knew from the start that this wasn’t going to be a ‘tell and test’ approach to compliance training. We included self-reflection, through thought-provoking and questioning techniques.”
– Mike Ditchburn, Senior Instructional Designer, QA

From the start it was clear that a highly visual approach was required to achieve the objective of engaging people and making them think differently. The visuals had to work in tandem with the real-life stories to create an emotional response to the training, which would have a lasting effect far beyond the end of the training experience.

“In a lot of ways, the simplicity of the module is its main weapon. We used bold and diverse people photos alongside their thoughts, representing hard-hitting examples of everyday discrimination and the personal impact it had on their lives. They are thought-provoking, sometimes shocking and really bring the impact of discrimination home.”
– Vaishali Singh, Head of Learning Architecture, QA 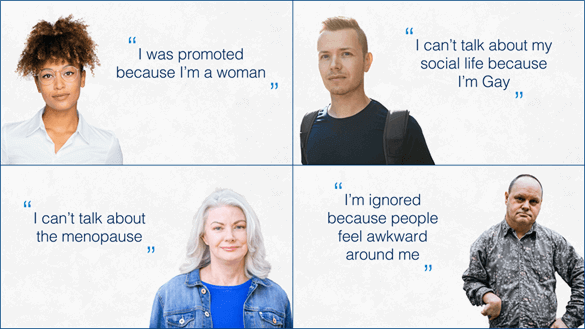 Stock images were quickly dismissed as they don’t help people contextualise the learning. Instead, we included photos of staff in the control room, admin offices and traffic offices as the basis of the photo-based animation and explainer videos. This was deliberate because the images represented a large selection of those different job roles that exist across National Highways, helping to build the authenticity of the training experience but also to maximise engagement and minimise people thinking this problem only existed elsewhere in the organisation. The bold and diverse people photos were the initial “hook” for the simple but hard-hitting examples of everyday discrimination. This approach ensured the training had impact, and really brought the story to life, reducing barriers to engagement.

The highly visual approach was further enhanced with infographics designed to embed the facts, and snappy messages displayed using flip cards at the end of each topic to highlight the key takeaways.

Each year, National Highways runs an employee engagement survey. In previous years, the views of employees regarding the employer’s approach to EDI were neutral. But in 2020, two months after the QA learning module went live and with 74% of the employee population having completed the module, there was a significant cultural step change.

It was an 81% favourable score, which places it firmly in the high performing score quartile.

For National Highways ED&I Manager Ronnie Calderwood-Duncan, this result absolutely reinforced everything that the organisation had been trying to achieve that year:

“Our employees told us that they thought National Highways values and promotes employee diversity. The ED&I module was absolutely core to this result. It was a step change, a real cultural change for us.”

Previously, National Highways had not had much of an appetite for online learning either. But in February 2021, less than 6 months after the launch, more than 90% of the employee population had completed the training.

With 15 years of L&D experience, Caroline Archer, Learning & Development Lead, was impressed by the result but also by the response from across National Highways:

“It is clear to me that the QA learning module encouraged this impressive level of engagement. Right from the start and all the way through, people felt compelled, really compelled, to comment on the quality and effectiveness of the training module. Feedback has been positive from across the community, including from our trade unions. We have simply just never had this response to training content. The fact we are getting this feedback from our learners about the content and the experience makes this is an absolute win for me.”
– Caroline Archer, Learning & Development Lead, Highways England

Feedback to the module

“After working here for 15 years I can honestly say it’s the best e-learning module I’ve ever done.” – TU rep

“Thanks again for putting together such a fantastic module!” – Customer Service & Communications Manager

“I have just completed the Equality, Diversion & Inclusion Training and Quiz and was surprisingly impressed, it is one of the better training docs I have seen compared to other organisations.” – PfP Administrator

Learn more about our bespoke learning solutions for organisations

National Grid asked QA to develop bespoke software for their gas and electricity engineers, and to deliver the training too.…

When Leeds City Council wanted to engage their staff around the critical subject of Information Governance, they turned to le…