What Impact will IR35 have on the Private Sector?

The Government has announced its plans to extend the IR35 changes to the private sector from 6 April 2020. This blog discusses the upcoming IR35 changes and looks at how this will affect the technical talent shortage.
12 likes

IR35 legislation (also known as, ‘off-payroll rules’) was originally introduced in 2000, to tackle the avoidance of employment taxes by individuals who work through intermediaries, normally their own company, often known as a Personal Service Companies (PSC). Where IR35 applies, the earnings of the intermediary company is considered to be a ‘salary’, on which Income Tax and National Insurance contributions are payable. Back in 2000, the rules allowed contractors to self-assess their IR35 status. 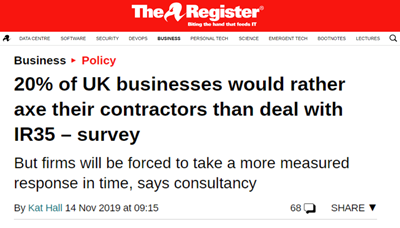 In 2017, the Government made changes to the IR35 legislation for the public sector. The changes signalled a change in the responsibility for the IR35 assessment. From 2017, it was decided this would sit with the engaging organisation, rather than the contractor (which had previously been the case).

In July 2019, the Government announced its plans to extend the IR35 changes to the private sector. From 6 April 2020, medium and large sized organisations in the private sector (including third sector organisations) will assume responsibility for deciding the employment status of their workers. Guidance has been created by HMRC to help organisations determine whether an employment relationship exists. Organisations are also encouraged to use the Government's Check Employment Status Tool (CEST). The tool asks a series of questions relating to the duties of the worker and then advises on their IR35 status, based on the answers given. However, caution should be exercised using the tool as it has not been proven to be 100% accurate when applied in the public sector.

In the Policy Paper, ‘Rules for off-payroll working from April 2020’, HMRC commented, “Up to 60,000 engager organisations outside the public sector are in scope of the reformed off-payroll working rules. The changes are expected to affect 170,000 individuals working through their own company, who would be employed if engaged directly.”

Up to 60,000 engager organisations outside the public sector are in scope of the reformed off-payroll working rules.

How will IR35 affect the technical talent shortage?

Following the 2017 rollout of the IR35 changes in the public sector, Charles Cotton, Senior Performance and Reward Adviser at the Chartered Institute of Personnel and Development (CIPD), commented “HR professionals have said they are finding it harder to recruit and retain skilled contractors, which is contributing to project cost rises, projects being delayed and, in some cases, projects even being cancelled,”

A survey by the CIPD and The Association of Independent Professionals and the Self-Employed (IPSE), found that, “More than half (51%) of public sector hiring managers thought they had lost skilled contractors because of April 2017’s changes to the IR35 rules, while nearly three-quarters (71%) were facing challenges in retaining their contractors. Furthermore, four out of five (80%) hiring managers said they had seen a rise in workload involved in engaging and paying contractors.”

The IT industry often requires a flexible workforce where resource can be scaled up and down to meet peaks in demand during programmes of work . This typically results in a greater reliance on contractors than many other industries.

A recent survey found that 20% of UK businesses would rather axe their contractors than deal with IR35 and research carried out by Brookson Legal found that, “85% of IT businesses agreed that the legislation will have an impact on the number of contractors they hire — 12% more than the UK average of 73%.”

The IR35 changes will mean many contractors will see a significant change in their take-home pay, whilst not receiving any of the benefits available to permanent employees such as holidays, company pension or sick pay. This has left some commenting that those with sought-after technical skills will be discouraged from entering or remaining in the contractor market.

An article in Information Age stated, “Many companies are worried that contractors may be put off the industry entirely and may enter permanent employment; meaning there’ll be an even more significant shortage of workers with the niche IT skills required.”

Another survey found “Nearly one third (31%) of contractors are thinking about becoming a permanent employee, with a further 42% undecided and only 27% intent on continuing to work as a contractor.

With a smaller pool of flexible talent to draw upon, private sector organisations should expect day rates to rise and the availability of resource to decrease.

IR35 and the Financial Services Sector?

Some organisations in the private sector are already preparing for the potential impact IR35 changes may have. The aforementioned research by Brookson Legal also found that, “71% of UK finance firms are considering taking a blanket approach to managing the new IR35 legislation, due to come into force in 2020, as they do not have the time to assess contractors individually.”

With less than six months to go until the changes come into effect, some of the leading organisations in the financial services sector are starting to react. Lloyds Bank and Barclays have both released statements communicating their plans to phase out their reliance on limited company contractors. 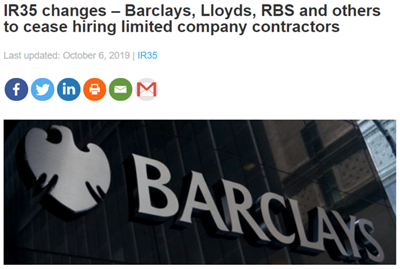 This follows reports that banking giant HSBC allegedly told its contractors earlier this year to choose between becoming permanent employees or quitting altogether, and Morgan Stanley is understood to have given its contractors a similar ultimatum.

With the increased administrative burden, additional contractor costs and the risk of an HMRC enquiry with sizeable financial costs and penalties if a contractor is incorrectly assessed, it is not surprising that some organisations are taking such a blanket approach.

Eddie Ginja, Client Strategy Director at QA Consulting commented, "We're increasingly hearing concerns from clients who are worried about how IR35 may impact their delivery teams, disrupt projects and affect sensitive matters such as retaining Intellectual Property. As a result, we think the IR35 tax rules are likely to be a real game changer to the way staff are retained and recruited in the future, especially for organisations that are heavily reliant on contractor staff to deliver their IT programmes of work."

For organisations in the private sector, the next few months will be crucial to analyse the impact that IR35 may have for them. It is recommended that companies should use this time to put a strategy in place to mitigate risks and ensure delivery deadlines will still be met and within budget.  If you would like to learn more about how organisations in the private sector should be preparing for IR35, please register for our upcoming webinar, IR35 Changes in the Private Sector – Are You Ready? on Tuesday 10th December at 10:30am.

QA helps organisations overcome challenges attracting and retaining in-demand technical talent. Through our ‘Recruit.Train.Deploy.’ model, you can rapidly scale your delivery capability whilst retaining knowledge and IP, and removing the administrative burden, cost and IR35 risk associated with using contractors.

Find out how we can help you build your technical talent pipeline with Cloud Engineers, DevOps Engineers, Software Developers, Test Automation Engineers and RPA Developers. Request a call back today.

Please note: The contents of this website and materials from QA do not constitute legal advice and are provided for general information purposes only. If you require specific legal advice you should contact a specialist lawyer.

Skills for the digital age

Why does this t3.large cost you 50% more than an m5.large? AWS trainer Justin Watkins explains.

4 things you need to know about cyber security in 2020

Cybersecurity researcher James Aguilan predicts four areas that will shape the future of cybersecurity in the decade ahead.

Don’t Ignore The Gorilla – Not the Elephant – In The Room

QA's Head of Organisational Consultancy, Dr Ian Clarkson, argues that achieving the project output should not come at the exp…

QA's Head of Organisational Consultancy, Dr Ian Clarkson, looks at how systems of the mind influence and govern how we make i…

Can You Cut It In Project Management

QA's Head of Organisational Consultancy, Dr Ian Clarkson, looks at understanding how the mind interacts with its environment.…

What's the difference between agile and scrum?

What is the sprint goal and why is it important?