Book online today or, if you need help choosing the right course or would like to discuss business discounts, call us on 03301 737 071.

Tech types
Our courses are labelled to help you choose the right level for your needs.

Premium
QA's premium courses are often exclusive to QA, these courses harness our expertise to ensure training with real-world application.

SFIA
Skills Framework for the Information Age (SFIA) identifies and describes over 100 skills and 7 levels of job roles. To find out more, read What is SFIA?

To put it bluntly, writing C/C++ code can be a minefield for reasons ranging from memory management or dealing with legacy code to sharp deadlines and code maintainability. Yet, beyond all that, what if we told you that attackers were trying to break into your code right now? How likely would they be to succeed?

This course will change the way you look at your C/C++ code. We'll teach you the common weaknesses and their consequences that can allow hackers to attack your system, and – more importantly – best practices you can apply to protect yourself. We give you a holistic view on C/C++ programming mistakes and their countermeasures from the machine code level to virtual functions and OS memory management. We present the entire course through live practical exercises to keep it engaging and fun.

Writing secure code will give you a distinct edge over your competitors. It is your choice to be ahead of the pack – take a step and be a game-changer in the fight against cybercrime.

Learners get two weeks access to the Avatao platform to practice what they have learnt in the classroom.

Note: This course comes with a number of easy-to-understand exercises providing real-time ethical hacking fun. By accomplishing these exercises with the support of the trainer, participants can analyze vulnerable code snippets and commit attacks against them in order to fully understand the root causes of certain security problems. All exercises are prepared in a plug-and-play manner by using a pre-set desktop virtual machine, which provides a uniform development environment.

IT security and secure coding

Principles of security and secure coding

This is a NCSC Certified Training Course. The exam is a Proctor-U APMG exam for the Certificate , which will be taken by delegates in their own time after the course. Delegates will receive individual emails to access their AMPG GCT candidate portal, typically available two weeks post exam.

Learners get two weeks access to the Avatao digital platform to practice what they have learnt in the classroom.

About the course author

SCADEMY works together with security specialists since 2014 in order to spread the word worldwide that secure coding is something that all developers who work with source code must be aware of. One of our senior trainers, Sandor Kardos is with SCADEMY since the beginning, and he has delivered the highest number of security training courses among our team of trainers. With seven years of experience as a senior trainer he became an expert in IT Security. With security breaches occurring throughout the world, there is much need to learn about Web security and secure coding. Sandor is one of the best instructors, who is up to date, thoughtful and delivers fabulous courses – as one of his ex-students evaluated his performance after the course.

Since his childhood, Sandor has been extremely interested in computers. He started to read a book about programming when he was 13, and he learned assembly coding just by himself. He now holds a degree in Computer Science from the Budapest University of Technology and Economics (BUTE), and he also was a PhD student at the same university. After finishing his studies, Sandor worked as a research fellow, and published several research papers in the field of wireless communication (Bluetooth), TCP/IP, and ISP pricing. He also worked as a lecturer at BUTE, teaching subjects like Traffic Information Technology, C/C++ programming and Relational Database Handling. Software development also played an important role in Sandor’s professional life. He participated in different interesting projects like creating a pothole locator app for the Hungarian Public Roads company, an NFC-payment app, an insurance claims manager app, and a barcode validator app for major companies in Hungary. He also was the lead developer for the Android Smartbank application of the largest and oldest Bank in Hungary, OTP Bank. For the last 8 years he has fully dedicated himself to teaching. He has delivered courses all over the world: from Canada to China with great success.

Sandor’s passion is teaching. He really has a talent for education, and he enjoys explaining complex concepts clearly. He is the kind of person who always strives to find the most effective ways to transfer knowledge. Regarding IT Security, his favourite subjects are secure coding and cryptography. Sandor is also passionate about artificial intelligence. Technology must serve our daily life and make it smoother and easier – this is his motto. When not engaged in teaching, Sandor is thinking about creating intelligent machines that can help people and make our life easier.

This is an NCSC Certified Training Course.

In partnership with our Secure Coding partner Scademy. 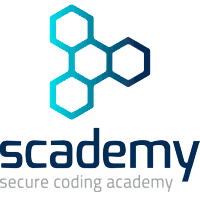 See all of our FAQs

There are a number of ways to create an account. If you are a self-funder, simply select the "Create account" option on the login page.

If you have been booked onto a course by your company, you will receive a confirmation email. From this email, select "Sign into myQA" and you will be taken to the "Create account" page. Complete all of the details and select "Create account".

If you have the booking number you can also go here and select the "I have a booking number" option. Enter the booking reference and your surname. If the details match, you will be taken to the "Create account" page from where you can enter your details and confirm your account.

Our virtual classroom courses allow you to access award-winning classroom training, without leaving your home or office. Our learning professionals are specially trained on how to interact with remote attendees and our remote labs ensure all participants can take part in hands-on exercises wherever they are.

We use the WebEx video conferencing platform by Cisco. Before you book, check that you meet the WebEx system requirements and run a test meeting (more details in the link below) to ensure the software is compatible with your firewall settings. If it doesn’t work, try adjusting your settings or contact your IT department about permitting the website.

Learn more about our Virtual Classrooms.

How do QA’s online courses work?

QA online courses, also commonly known as distance learning courses or elearning courses, take the form of interactive software designed for individual learning, but you will also have access to full support from our subject-matter experts for the duration of your course. When you book a QA online learning course you will receive immediate access to it through our e-learning platform and you can start to learn straight away, from any compatible device. Access to the online learning platform is valid for one year from the booking date.

All courses are built around case studies and presented in an engaging format, which includes storytelling elements, video, audio and humour. Every case study is supported by sample documents and a collection of Knowledge Nuggets that provide more in-depth detail on the wider processes.

When will I receive my joining instructions?

Joining instructions for QA courses are sent two weeks prior to the course start date, or immediately if the booking is confirmed within this timeframe. For course bookings made via QA but delivered by a third-party supplier, joining instructions are sent to attendees prior to the training course, but timescales vary depending on each supplier’s terms. Read more FAQs.

When will I receive my certificate?

Certificates of Achievement are issued at the end the course, either as a hard copy or via email. Read more here.