Is the Apprenticeships Levy helping to close the tech skills gap?

For the Tech sector, the Apprenticeship Levy is delivering on its strategic intent. It is putting employers in control, and the new range of standards are better aligned to the priority occupations needed by employers.
23 likes
by QA
14 August 2019

Employment in IT and tech occupations continues to grow at pace. The number of people employed as IT professionals grew by 31% between 2012 and 2018 from 1.09m to 1.44m. Since the Levy started in 2017, the employment of tech professionals has grown 6%*. [1]

The sector could grow even faster but it is constrained by the availability of skilled professionals. Research conducted by Accenture found that failing to address the Digital Skills Gap could cost the UK 0.5% of GDP growth every year between 2018 and 2028, worth a total of £138bn [2]

For the Tech sector, the Apprenticeship Levy is delivering on its strategic intent. It is putting employers in control, and the new range of standards are better aligned to the priority occupations needed by employers. Apprenticeships are growing faster than the sector as a whole, particularly in those roles that support digital transformation efforts – for instance, data analyst programme starts have more than tripled.

The coming years offer employers the opportunity to take this further, particularly in the areas of most acute shortages. In doing so, they can transform their Apprenticeship Levy funds into a sustainable approach to developing tech talent, and ultimately a more productive workforce.

A quick recap about the Levy

The Apprenticeship Levy set out to incentivise employers to invest in training, and at the same time transfer money and purchasing decisions to them – putting the power to decide which training is required with those at the front line. This has certainly changed the way employers view apprenticeships. Employers now treat the Levy as their own money to spend, and have become much more discerning customers. At QA, we see procurement and legal teams are more commonly involved in apprenticeship programme decisions than they were before. It’s not only changed what they buy, it has also changed how they buy.

There is good news to celebrate. The overall trend is towards higher level programmes in higher value sectors [6]. Exhibit 1 shows the decrease in Level 2 starts and the corresponding increase in starts at Level 3 and 4+. Employers have driven a shift to training at a higher level. 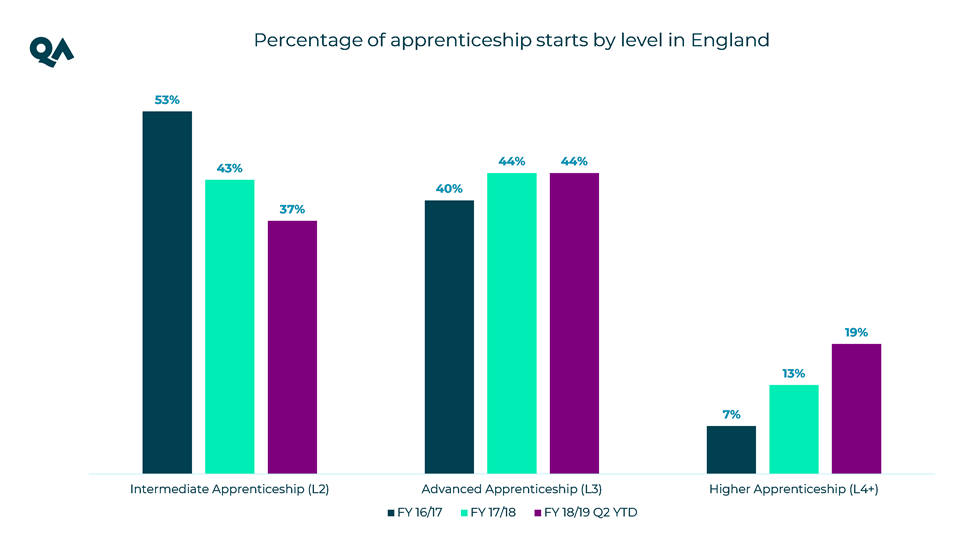 These are the skills that employers need most and are hardest to find on the open market, so it stands to reason. In the “Working Futures 2014 to 2024” report, Warwick University predicted that the number of roles requiring Level 4 qualifications would rise by 42%, meaning 54% of all employees need to be qualified to that level [5].

The Levy allows the system to respond to this overall workforce trend by removing barriers that existed in the old system. For example, a 19 year old starting a Level 4 Higher Apprenticeship straight out of school would have required large employers to pay approximately £6,000 in top-up fees because ESFA only funded 37.5% of the programme cost. Under the Apprenticeship Levy system, the employer can use the Levy for 100% of the fees, which removes the disincentive and enables them to select the programme they want and to select the best person for the role.

On the other hand, there are new barriers in place for Level 2 programmes. In the short term there’s been a lack of available Level 2 standards, but that’s not the main issue. There are bigger problems for employers which suppress these starts. The clearest is the 20% off-the-job learning requirement; for roles in sectors such as retail, hospitality and care, giving front-line staff a day a week for learning means hiring additional staff to backfill those apprentices and this can’t easily be justified.

When examining the breakdown of starts by sector (Exhibit 2), it shows that these starts in these sectors have reduced, whilst those sectors with higher proportions of roles at Level 3 and above have grown. 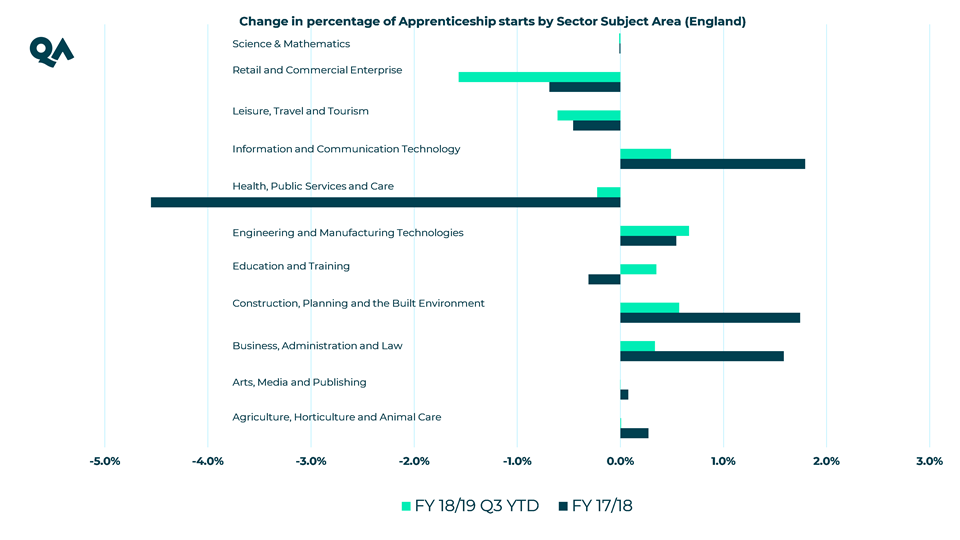 This is combined with a rising minimum wage, mandatory pension contributions, increasing business rates and, for retail and hospitality, a period of profound market disruption driven by the likes of Amazon and Airbnb respectively. In short, it simply doesn’t make sense for them to spend their levy on the programmes they used to.

What does this look like in the Tech sector?

The Tech sector fits the profile of a high value sector with the majority of employment in highly skilled roles – in educational language these roles are “Level 4” or above. There are roles at “Level 3” but these are often a stepping stone rather than an area of mass employment. In the period between 2011 and 2018, employment in the sector grew by 31%. Exhibit 3 shows the breakdown of this growth by occupation. 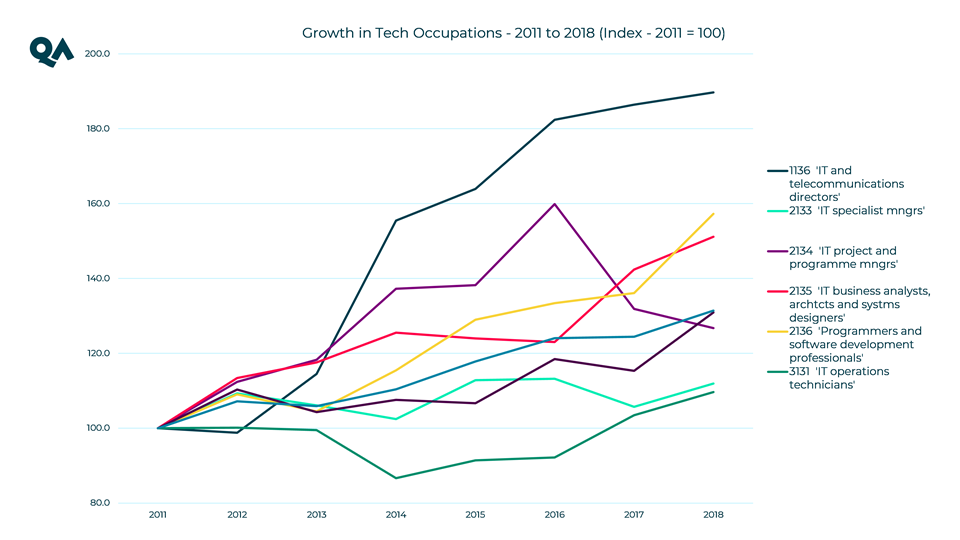 The fastest growing occupations in tech have been IT Directors, (89%) Software Developers (57%) and Business Analysts and Systems Architects (51%).  IT Operations and field engineering roles have grown much more slowly (9%).

Tech Apprenticeship starts went down in 2016/17 in the period immediately before the Levy as employers sought to avoid spending money unnecessarily before the tax started to be collected. The numbers recovered in 2017/18, the first full year of the Levy, with Tech Apprenticeships increasing by 14.5%. Exhibit 4 shows in the first half of 2018/19, this growth has accelerated with a 20% increase compared to the same period in the prior year. *** 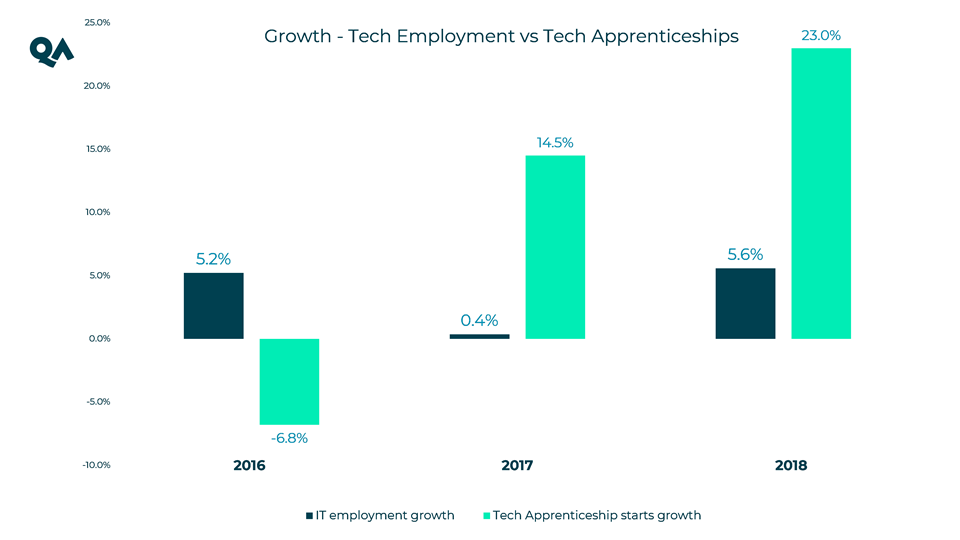 This means that apprenticeship numbers are growing faster than employment in the tech sector as a whole, and that’s good news as it means apprentices have become a larger part of the recruitment mix for employers.

Whilst the national trend shows an increase in large employers recruiting apprentices, our experience and our data shows that it’s not all about the biggest companies. Since the Levy started, QA has had more apprentices start in small tech companies (less than 50 employees), than in the largest blue chips (5,000 or more employees). In total we have had over 1,000 apprentices start in technology firms with under 500 employees, which shows that this remains a key engine for growth and that small employers are using apprentices to support that expansion.

The DevOps Engineer standard is currently being finalised and is already attracting significant interest from employers. QA has always historically seen employers use apprenticeships when mainstream recruitment avenues have been exhausted. This shows us again that perceptions are changing, and employers are more willing to invest time and Levy funds in growing their own talent rather than relying on ‘the market’ to provide.

Our own data shows that apprentices are increasingly being recruiting into tech roles in other sectors, which is a key symptom of digital transformation across the economy. This data shows a number of technology intensive sectors committed to changing their workforce:

The Levy has supported Apprenticeships policy moving in the right direction – providing a higher return on investment by shifting training spend towards higher-level capability in sectors with skills shortages. This has been most prevalent in those sectors at the forefront of digital transformation such as professional services and finance, but others are already following their lead.

More apprenticeship standards are due to follow – and these will only enhance the employers’ options to help close the tech skills gap.

In analysing the IT employment figures in this report, the following list of SOC codes have been included:

**Figure quoted in report is $185bn, which has been converted to GDP using an exchange rate of $1:0.75GDP

*** In analysing Tech Apprenticeship starts from ESFA FE Data Library reports, the following Frameworks and Standards have been included:

Get in touch with us today at employanapprentice@qa.com